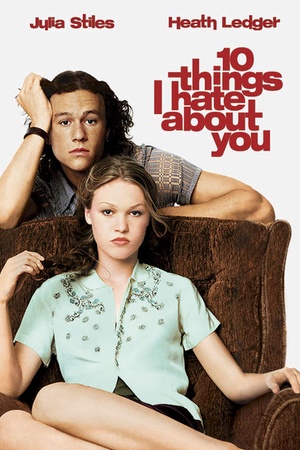 Is 10 Things I Hate About You on Netflix United States?

Sorry, 10 Things I Hate About You (1999) isn't available on Netflix United States, but is available in a different country.

On the first day at his new school, Cameron (Joseph Gordon-Levitt) instantly falls for Bianca (Larisa Oleynik), the gorgeous girl of his dreams. The only problem is that Bianca is forbidden to date ... until her ill-tempered, completely un-dateable older sister Kat (Julia Stiles) goes out too! In an attempt to solve his problem, Cameron singles out the only guy who could possibly be a match for Kat: a mysterious bad-boy (Heath Ledger) with a nasty reputation of his own! A pretty, popular teenager can't go out on a date until her ill-tempered older sister does. After learning Bianca can't date until her man-hating older sister Kat finds a beau, Bianca's would-be boyfriend pays a moody school rebel to woo her.