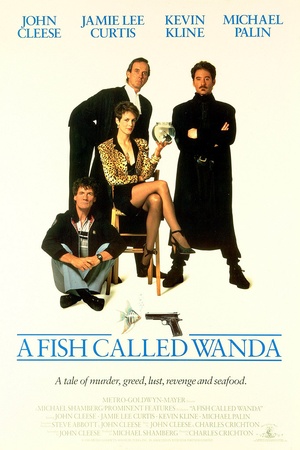 Is A Fish Called Wanda on Netflix United States?

Sorry, A Fish Called Wanda (1988) isn't available on Netflix United States, but is available in a different country. Still want to view it? click here.

A crooked quartet commits the heist of the century, but one gets arrested. Can the others persuade their friend's lawyer to reveal the loot's locale? In London, four very different people team up to commit armed robbery, then try to doublecross each other for the loot. Four career cons just committed the crime of the century. But when a double-cross leaves their loot in limbo, it’s up to one American temptress (Jamie Lee Curtis) to convince one English lawyer (John Cleese) to reveal its location. Monty Python veteran John Cleese co-wrote and co-stars in this hilarious tale of lust, sex, murder and seafood, which won an Academy Award for Kevin Kline for his performance as an unhinged hitman. Also starring Python veteran Michael Palin, A Fish Called Wanda is “a deliciously dishy comedy” (Washington Post).