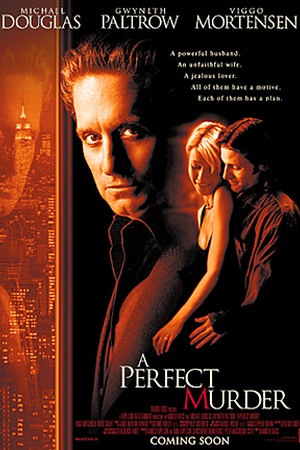 Is A Perfect Murder on Netflix United States?

Sorry, A Perfect Murder (1998) isn't available on Netflix United States, but is available in a different country.

A wealthy Wall Street speculator discovers that his wife has a lover. He investigates him and uses the carrot and stick to make him murder his wife. Planned to detail, it seems like a perfect murder. It's murder most foul when cold-blooded hedge fund manager Steven Taylor hires a hit man to drop a dime on his philandering young wife, Emily. Millionaire industrialist Steven Taylor is a man who has everything but what he craves most: the love and fidelity of his wife. A hugely successful player in the New York financial world, he considers her to be his most treasured acquisition. But she needs more than simply the role of dazzling accessory. Brilliant in her own right, she works at the U.N. and is involved with a struggling artist who fulfills her emotional needs. When her husband discovers her indiscretion, he sets out to commit the perfect murder and inherit her considerable trust fund in the bargain. Very little is what it seems in this thriller that is sizzling with suspense. Starring Academy Award and Golden Globe-winner Gwyneth Paltrow ("Proof," "Shakespeare in Love"), Academy Award and Golden Globe-winner and Emmy-nominee Michael Douglas ("The In-Laws," "Don't Say A Word") and Viggo Mortensen ("Hidalgo," the "Lord of the Rings" trilogy).