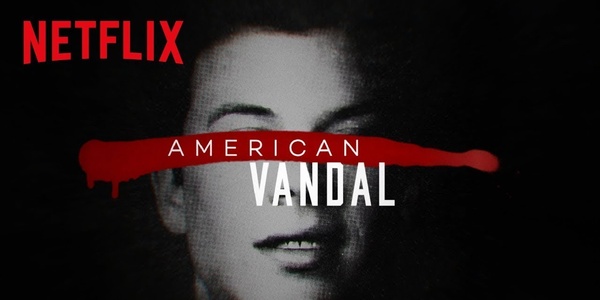 True-crime stories have become quite popular on television. Famous criminals such as O.J. Simpson and the Unabomber have been the subject of TV miniseries. Netflix has helped to boost the popularity of the genre with a number of series that include the Jon Benet Ramsey case, the University of Texas tower sniper, and Whitey Bulger. So, it was inevitable that the live streaming service would offer a satire of true crime, entitled  “American Vandal.”

The story of “American Vandal” starts when someone spray paints pictures of penises on the cars owned by the faculty of a high school somewhere in the United States. The eight-part series plays the story very straight, filmed in the style of a documentary done by a high school sophomore named Peter Maldonado, played by Tyler Alvarez. The series follows all of the conventions of a true-crime series, including “news” footage, interviews, and candid video of some of the participants. The story involves the identification of the culprit, a student named Dylan Maxwell, played by Jimmy Tatro. The series will apparently ask the question, was Dylan the real perpetrator and was he expelled unjustly? If so, the real American Vandal may well be out there still.

Audiences have been fascinated by criminals and the crimes they commit likely from the beginning of civilization. Television and the movies have provided a great outlet for that interest. True-crime stories provide a kind of morality tale in which a central character commits some offense or, in the case of a serial killer, a series of offenses. Audiences get to experience watching as law enforcement investigates the crime and, inevitably, catches the perpetrator. True-crime stories usually include the trial and, if the defendant is convicted, the sentencing and the punishment. Audiences can connect with the kind of people they would never want to meet in real life, people who are willing to commit heinous crimes, especially murder.

Of course, “American Vandal” turns all of that on its head. Almost everyone who has been to high school has met the sort of person who would spray paint phallic symbols on the personal vehicles of teachers. Some people may well have been that guy. And if it is not obscene graffiti, it is some other act of teenage rebellion. Fortunately, most kids grow out of that phase.

The mockumentary plays the act of graffiti vandalism as seriously as if the perpetrator were knifing fellow students in the halls. Will the result be as funny as it seems to be intended? We’ll know when “American Vandal” appears on Netflix on September 15, 2017.