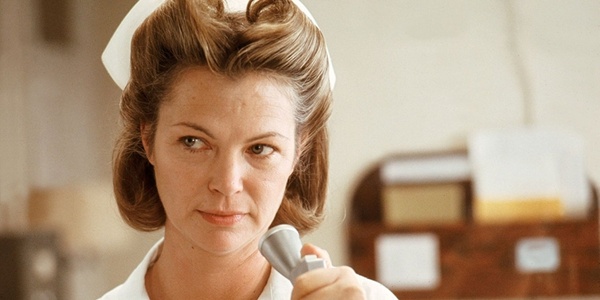 Nurse Ratched, the psychotic nurse played by Louise Fletcher in the 1975 film “One Flew Over the Cuckoo’s Nest” is one of the most terrifying characters in cinema. In the movie and the 1962 novel Ratched was the head administrative nurse of a mental institution that she ruled with a tyrannical zeal. She used access to medications, privileges, and even basic necessities to maintain absolute control over patients who were under her charge. Nurse Ratched was symbolic of how power corrupts, even in bureaucracies that are meant to help people, such as mental health facilities.

Deadline Hollywood reports that Netflix is developing a series, to be entitled “Ratched,” that will delve into the early years of the most terrifying woman ever to wear the white nurse’s uniform. Ryan Murphy and Michael Douglas are set to produce with Sarah Paulson set to play the young Ratched.

The series was created by Evan Romansky, who is fresh out of film school, who also wrote the pilot on spec. Murphy was so enthusiastic about the project that he spent a year getting the writes to the story and the character. Romansky will also co-executive produce. Romansky’s involvement, so early in his career is something out of Hollywood in its own right.

“Ratched” will begin in 1947 when the young, newly-minted nurse arrives at her first job. The series will explore how the character devolved into the monster who we see in the movie. The Netflix series order is for an unprecedented two-season, eighteen-episode order, with production slated to begin in mid-2018.

Ken Kesey wrote the original novel based on his experiences working as an orderly in a mental health facility in the 1950s. At the time depicted in the novel and the subsequent movie, mental patients were often made residents of facilities such as the one depicted in the story against their wills. The science of mental health therapy was somewhat underdeveloped, hence the use of dubious techniques such as electroshock therapy and even frontal lobotomies, which tended to make people with mental health issues worse.

Kesey depicted the mental hospital in his story as akin to a prison, with the lives of the patients circumscribed in ways both subtle and gross. Nurse Ratched was certainly an extreme case of the sort of medical professional who worked at such places in that era. However, she thrived in that environment rather than her power being curbed, which was part of the point of the story. The origin story of the character should be illuminating.