Science fiction has dealt with the idea of time travelers from the future trying to change history to prevent some sort of unimaginable catastrophe before. In the “Terminator” series a soldier from the future goes back to save the mother of the savior of humankind from a robot assassin. An operative from the future tries to stop a plague that will all but wipe out humanity in the TV series “12 Monkeys.” “Travelers” is another series playing with that concept. 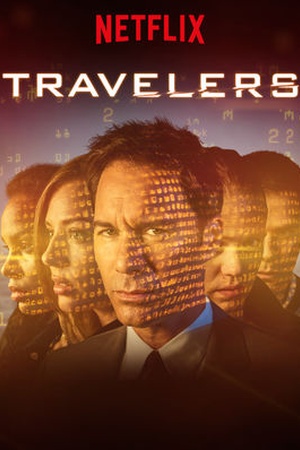 Created by Brad Wright, the co-creator of “Stargate: SG1” and the creator of “Stargate: Atlantis,” “Travelers” has a team of operatives from the future project their consciousnesses into the bodies of people living in the 21st century to try to alter history. They are armed only with their knowledge of what is going to be and therefore have to improvise and make do. They are led by a man who has projected himself into the body of an FBI Special Agent named Grant MacLaren. Other members of the team include a developmentally disabled woman named Marcy, a woman in an abusive relationship named Carly, a high school quarterback named Trevor, Philip, a heroin-addicted college student, and a young man named David.

Each of the “travelers” transfers into the bodies of their hosts just before they die. This method of going into the past likely changes history in a number of unexpected ways. Then they are tasked with a series of missions, for instance stopping a shipment of anti-matter that is scheduled to explode, killing thousands. The reason that the travelers have been sent back to the past is only slowly revealed as the 12-episode arc that consists of season 1 unfolds.

Another theme, common in time travel stories, is the temptation that some of the travelers experience to go “off mission” and save the life of someone whose existence does not matter to the course of future events but whose death would be a tragedy.

The future, it is hinted, is very bleak, so the travelers get to experience some of the simple joys of things like plentiful food and other leisure options that the 21st century has to offer. The “fish out of water” theme that is also common in time travel stories is also touched on in “Travelers.”

“Travelers” is a joint American-Canadian production, premiering in Canada a month before it dropped on Netflix in late December.

So far there is no word about a second season, but “Travelers” so far is getting good reviews, so the betting is that it is likely to happen.