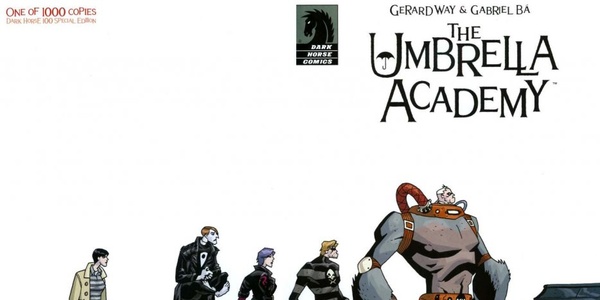 The Hollywood Reporter announced that Netflix is going to develop “Umbrella Academy” based on a graphic novel written by Gerard Way and drawn by Gabriel Ba. The series will be a 10-part live-action adventure and is scheduled to drop on the live streaming service sometime in 2018.

The graphic novel is set in an alternate universe in which President John F. Kennedy was never assassinated. Sometime in the mid-century, a number of women who were previously not thought to be pregnant suddenly deliver babies that have remarkable super powers. The event is heavily implied to have been caused by God and that the children are collectively the Messiah. The seven surviving children are adopted by Sir Reginald Hargreeves, aka “The Monocle,” a space alien posing as a famous businessman. He is preparing the children, Spaceboy, The Kraken, The Rumor, The Séance, Number Five, The Horror and The White Violin, to save the world from an unspecified threat. The action starts in an alternate 1977.

In the course of the story, the team becomes estranged from one another, due to clashing personalities attached to superpowers. However, the seven super heroes reunite when their foster father dies under mysterious circumstances in order to uncover the mystery that resulted.  The story will apparently be told in the Netflix series.

“The Umbrella Academy” joins a slew of comic book super heroes that have made it to either the small or big screens. Netflix has already developed a number of super hero TV shows, based on characters from the Marvel Comics Universe such as “Luke Cage,” “The Iron Fist,” “Daredevil,” “Jennifer Jones,” and a series that combines characters from the other four, “The Defenders.”

“The Umbrella Academy” is one of the few super hero stories to make it to TV or the movies that do not come from either the Marvel or DC Comics universes. The graphic novel was published by Dark Horse Comics and constitutes a standalone universe not related to any other storyline. The series will be produced by Universal Cable Productions. Gerard Way will serve as executive producer.