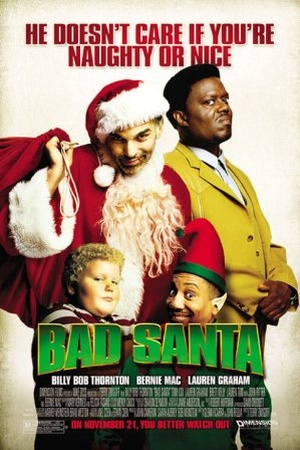 A miserable conman and his partner pose as Santa and his Little Helper to rob department stores on Christmas Eve. But they run into problems when the conman befriends a troubled kid. The baddest Santa ever comes to town with the hilarious Billy Bob Thornton, Bernie Mac, and John Ritter! Ill-mannered store Santa Willie Stokes (Thornton) is really a safecracker with a holiday tradition of making one big score every Christmas Eve with his clever Elf-partner-in-crime Marcus. But this year's heist-fest could be completely foiled by a snoopy store manager (Ritter), savvy mall detective (Mac), sexy Santa fan, and an innocent 8 year old misfit who thinks the intoxicated and felonious Willie is the real Santa he seeks. Criminals Willie and Marcus disguise themselves as Santa Claus and an elf and find work at major department stores with plans of robbing them blind.