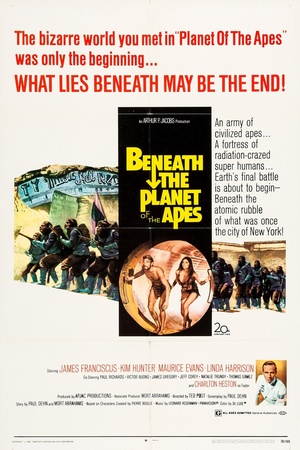 Is Beneath the Planet of the Apes on Netflix United States?

Sorry, Beneath the Planet of the Apes (1970) isn't available on Netflix United States, but is available in a different country.

Simians and subterranean human mutants are bent on destroying one another and the world in this sequel to the original sci-fi hit. The sole survivor of an interplanetary rescue mission searches for the only survivor of the previous expedition. He discovers a planet ruled by apes and an underground city run by telepathic humans. In the acclaimed sequel to Planet of the Apes, another astronaut (James Franciscus) crashes through the time barrier searching for the missing Taylor (Charlton Heston). The daring rescue leads to a subterranean city where mutant humans, who practice mind control, worship a weapon capable of destroying the entire planet. Both an action-oriented science-fiction adventure and a wry commentary on today's world, it's imaginative entertainment for fantasy buffs of all ages.

Check the Beneath the Planet of the Apes (1970) trailer!