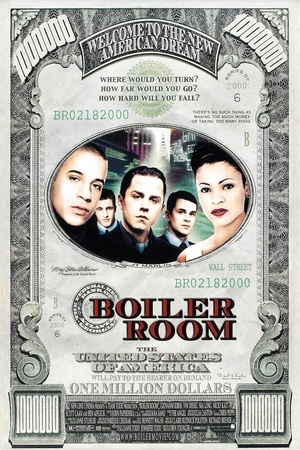 Sorry, Boiler Room is not yet available on Netflix.

A college dropout, attempting to live up to his father's high standards, gets a job as a broker for a suburban investment firm which puts him on the fast track to success. But the job might not be as legitimate as it first appeared to be. Welcome to the new American Dream. Seth Davis (Emmy Award-winner Giovanni Ribisi TV's "My Name is Earl," "Saving Private Ryan") is eager to show his aloof father that he can succeed in life, an ambitious, intelligent college dropout takes a job at a small stock brokerage firm, where he meets with great success. But when he learns that the company is selling worthless securities to gullible buyers, he realizes the cost of his ambitions--and how deeply embroiled he has become in the scam. Also starring Academy Award and Golden Globe-winner Ben Affleck ("Good Will Hunting," "Pearl Harbor").