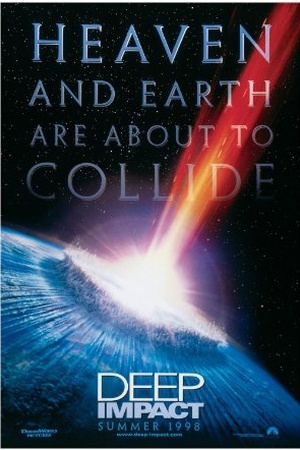 What would you do if you knew that in a handful of days an enormous comet would collide with Earth and all humanity could be annihilated? The countdown to doomsday is underway in this "gut-wrenching, eye-opening blast of a movie experience" (Jeff Craig, Sixty Second Preview). Mimi Leder (The Peacemaker) directs, guiding an all-star cast featuring Robert Duvall, Tea Leoni, Elijah Wood, Vanessa Redgrave, Maximilian Schell and Morgan Freeman. With the film's dynamic fusion of large-scale excitement and touching, human-scale storylines, Deep Impact makes its impact felt in a big and unforgettable way. A comet is discovered to be on a collision course with Earth. As doomsday nears, the human race prepares for the worst. With a massive comet threatening to destroy Earth, the U.S. president appoints a steely veteran astronaut to lead a crew into space to destroy it.