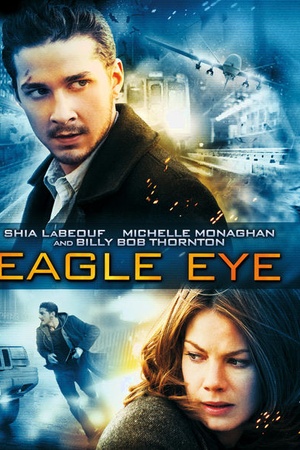 Sorry, Eagle Eye (2008) isn't available on Netflix United States, but is available in a different country. Still want to view it? click here.

An aimless slacker finds himself inexplicably linked to a notorious terrorist cell and hotly pursued by federal authorities. Jerry and Rachel are two strangers thrown together by a mysterious phone call from a woman they have never met. Threatening their lives and family, she pushes Jerry and Rachel into a series of increasingly dangerous situations, using the technology of everyday life to track and control their every move. "Eagle Eye" is a race-against-time thriller starring Shia LaBeouf, Michelle Monaghan, Rosario Dawson, Anthony Mackie, Michael Chiklis and Billy Bob Thornton. Two unsuspecting Americans are separately drawn into a conspiracy by a mysterious woman they have never met, but who seems to know their every move. By the time they discover her frightening identity, they have become her unwitting accomplices in a diabolical assassination plot.