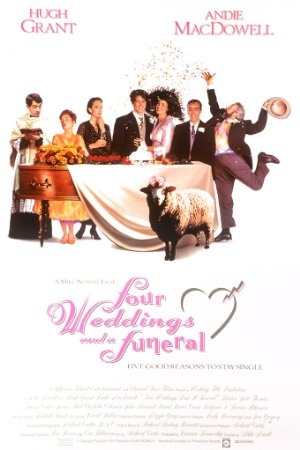 Is Four Weddings and a Funeral on Netflix United States?

Yes! Four Weddings and a Funeral (1994) is available on Netflix United States.

Over the course of five social occasions, a committed bachelor must consider the notion that he may have discovered love. This acclaimed British comedy centers on the intermittent romance between a charming (if slightly bumbling) Englishman and a beautiful American woman, who seem to always run into each other at weddings. Indeed, it is at the first of the title's four weddings that Charles (Hugh Grant) and Carrie (Andie McDowell) meet, enjoying a brief but fleeting connection. The spark is rekindled several months later, when they unexpectedly meet at another wedding. Unfortunately, however, Carrie has become engaged to another, a fact that complicates matters for them both. A commitment-phobic Brit tries to reconnect with an alluring American who's about to make a seemingly awful mistake by marrying a wealthy, boring man.

Check the Four Weddings and a Funeral (1994) trailer!