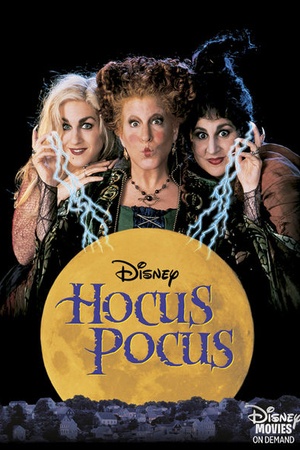 Sorry, Hocus Pocus (1993) isn't available on Netflix United States, but is available in a different country.

A curious youngster moves to Salem, where he struggles to fit in before awakening a trio of diabolical witches that were executed in the 17th century. Hollywood superstar Bette Midler (Beaches) joins Sarah Jessica Parker (Honeymoon in Vegas) and Kathy Najimy (Sister Act) as three outlandishly wild witches who return from 17th Century Salem for a night of zany fun and comic chaos. After they're accidentally conjured up by some unsuspecting pranksters, the tricky 300-year-old trio sets out to cast a spell on the town and reclaim their youth - but first they must outwit three pesky kids who are determined to foil their scheme! Loaded with bewitching laughs and magical special effects, "Hocus Pocus" is an outrageous comedy that's sure to entertain everyone. In this supernatural family comedy, a trio of 17th-century sibling witches is accidentally resurrected in the 20th century by teenager Max.