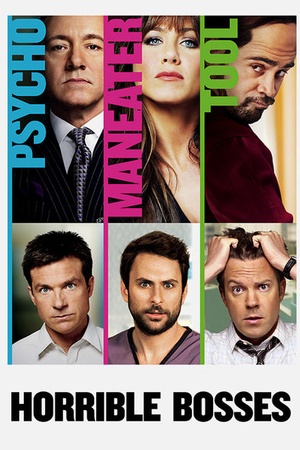 Sorry, Horrible Bosses (2011) isn't available on Netflix United States, but is available in a different country. Still want to view it? click here.

Three friends conspire to murder their awful bosses when they realize they are standing in the way of their happiness. For Nick, Kurt and Dale, the only thing that would make the daily grindmore tolerable would be to grind their intolerable bosses into dust. Quitting is not an option. So, with the benefit of a few-too-many drinks and some dubious advice from a hustling ex-con, the three friends devise a convoluted and seemingly foolproof plan to rid themselves of their respective employers...permanently. There's only one problem: even the best-laid plans are only as foolproof as the brains behind them. Jason Bateman (Arrested Development), and Jason Sudeikis and Charlie Day (both in Going the Distance) play the three hapless workers, while two-timeOscar® winner Kevin Spacey, and Golden Globe winners Colin Farrell and Jennifer Aniston are their unbearable bosses. Academy Award® winner Jamie Foxx plays the con, whose street cred is priced on a sliding scale in this workplace comedy directed by Seth Gordon (Four Christmases). Three disgruntled buddies can't leave their miserable jobs, so they cook up a creative strategy for eliminating their micromanaging bosses instead.