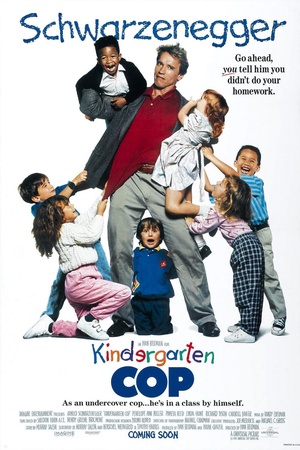 Sorry, Kindergarten Cop (1990) isn't available on Netflix United States, but is available in a different country.

A cop gets more than he bargained for when he goes undercover as a kindergarten teacher to get the goods on a drug lord while guarding the man's son. A tough cop must pose as a kindergarten teacher in order to locate a dangerous criminal's ex-wife, who may hold the key to putting him behind bars. Arnold Schwarzenegger stars as an undercover cop posing as a kindergarten teacher in order to catch a dangerous criminal. Once he wrangles his young charges, as well as the affections of a beautiful teacher (Penelope Ann Miller), he prepares for a final showdown with his intended prey in this "Totally enjoyable" (Ralph Novak, People Magazine) action-comedy from director Ivan Reitman.