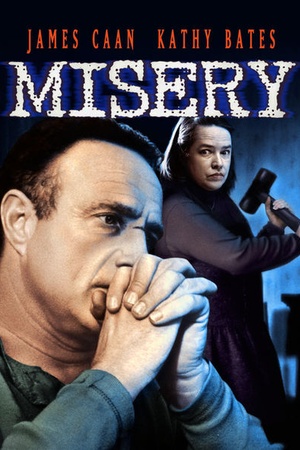 Is Misery on Netflix United States?

Sorry, Misery (1990) isn't available on Netflix United States, but is available in a different country. Still want to view it? click here.

After a famous author is rescued from a car crash by a fan of his novels, he comes to realize that the care he is receiving is only the beginning of a nightmare of captivity and abuse. When romance novelist Paul Sheldon (James Caan) is rescued from a horrific car accident by reclusive loner Annie Wilkes (Kathy Bates, in her Academy Award® winning role), he finds out she’s his “number one fan” and has read all of his books. But when an enraged Annie discovers that Paul kills off her favorite character (Misery Chastain) in his latest book, she decides to hold him captive and “bring her back to life” in a new novel. A terrifying psychological game ensues as Annie steps further and further back from the brink of reality, while Paul tries desperately to find a way out - before his deadline is up. Based on the chilling bestseller by Stephen King, Misery is “one of the best horror movies ever made.” (Time Magazine) A former nurse saves her favorite writer from a blizzard but morphs from nurturer to sadistic jailer when she learns he plans to kill off her heroine.