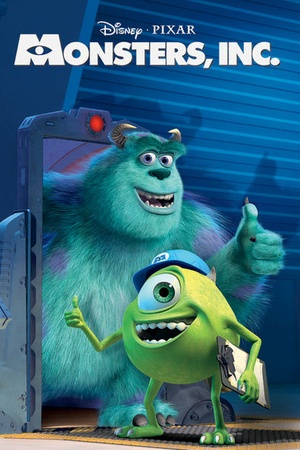 Sorry, Monsters, Inc. (2001) isn't available on Netflix United States, but is available in a different country.

In order to power the city, monsters have to scare children so that they scream. However, the children are toxic to the monsters, and after a child gets through, 2 monsters realize things may not be what they think. Set in Monstropolis, a thriving company town where monsters of all shapes and sizes reside, the film follows the monstrous misadventures of James P. Sullivan (John Goodman), known to all as "Sulley", and his best friend, roommate and co-worker Mike Wazowski (Billy Crystal). Both work at Monsters, Inc., the largest scream-processing factory in the monster world, where Sulley is the top kid Scarer and Mike is his enthusiastic Scare Assistant. The main power source in the monster world is the collected screams of human children. At Monsters, Inc., an elite team of Scarers is responsible for gathering those precious natural resources. Believed by monsters to be toxic, human children are strictly forbidden from entering Monstropolis. When a little girl named Boo (Mary Gibbs) accidentally follows Sulley back into his world, he finds his career in jeopardy and his life in utter chaos. Assisted by Mike, he schemes to rectify his mistake but the trio becomes caught up in a series of complications and unexpected intrigue beyond their wildest dreams. The professional scarers of Monsters Inc. sneak into kids' bedrooms at night to elicit screams that they convert into energy to run their world.