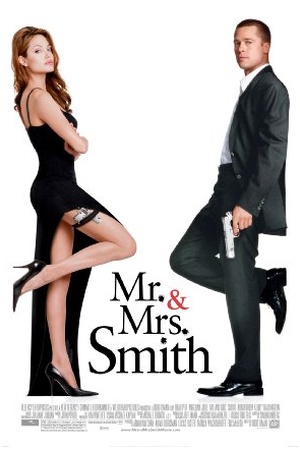 Sorry, Mr. & Mrs. Smith is not yet available on Netflix.

A bored married couple is surprised to learn that they are both assassins hired by competing agencies to kill each other. Brad Pitt and Angelina Jolie smolder in one of the most anticipated, sizzling action films ever made. After five (or six) years of vanilla-wedded bliss, ordinary suburbanites John and Jane Smith (Pitt and Jolie) are stuck in a rut the size of the Grand Canyon...until the truth comes out! Unbeknownst to each other, they are both coolly lethal, highly paid assassins working for rival organizations. And when they discover they're each other's next target, their secret lives collide in a spicy, explosive mix of wicked comedy, pent-up passion, nonstop action and high-tech weaponry that gives an all-new meaning to "Till death do us part!"