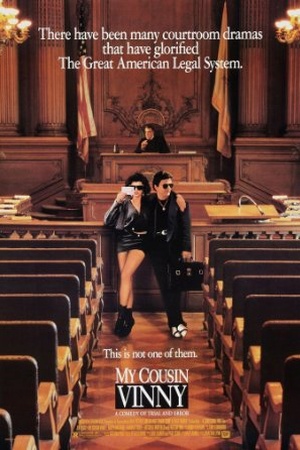 Is My Cousin Vinny on Netflix United States?

Sorry, My Cousin Vinny is not yet available on Netflix.

Two carefree pals (Ralph Macchio and Mitchell Whitfield) traveling through Alabama are mistakenly arrested, and charged with murder. Fortunately, one of them has a cousin who's a lawyer - Vincent Gambini (Joe Pesci), a former auto mechanic from Brooklyn who just passed his bar exam after his sixth try. Vinny's never been in court - or in Alabama - and when he arrives with his leather-clad girlfriend (Marisa Tomei in her Oscar® winning Supporting Actress performance), to try his first case, it's a real shock - for him and the Deep South! Two New Yorkers are accused of murder in rural Alabama while on their way back to college, and one of their cousins--an inexperienced, loudmouth lawyer not accustomed to Southern rules and manners--comes in to defend them. When teens Billy and Stan are falsely accused of killing a store clerk in Alabama, Billy summons help from his inexperienced lawyer cousin Vinny.