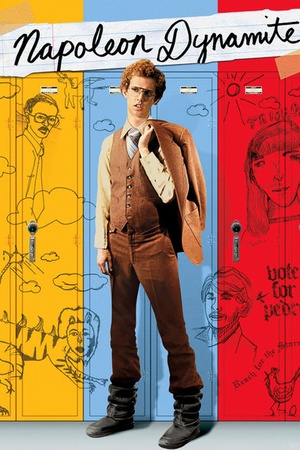 Sorry, Napoleon Dynamite (2004) isn't available on Netflix United States, but is available in a different country.

A listless and alienated teenager decides to help his new friend win the class presidency in their small western high school, while he must deal with his bizarre family life back home. A quirky teen from Idaho finds his life getting increasingly complicated when his shady Uncle Rico shows up with a scheme to sell plastic serveware. From the rural town of Preston, Idaho, comes Napoleon Dynamite (Jon Heder). With a red 'fro, his moon boots, and illegal government ninja moves, he is a new kind of hero. His family consists of fragile brother Kip (Aaron Ruell), who's seeking his soulmate in online chat rooms; Uncle Rico (Jon Gries), who is stuck in his "glory" days of high school football; and Grandma (Sandy Martin), who enjoys going out to the dunes on her quad-runner. Napoleon spends his days drawing magical beasts, working on his computer hacking skills to impress the chicks, and begrudgingly feeding his Grandma's pet llama. When his friend Pedro (Efren Ramirez) decides to run for class president, it is Napoleon to the rescue to help him triumph over adversity.