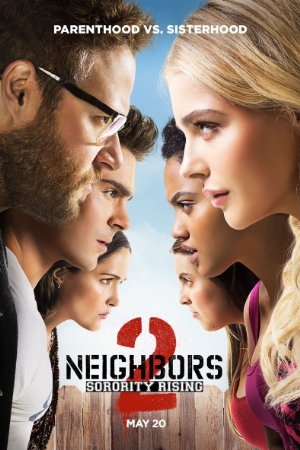 Sorry, Neighbors 2: Sorority Rising is not yet available on Netflix.

When their new next-door neighbors turn out to be a sorority even more debaucherous than the fraternity previously living there, Mac and Kelly team with their former enemy, Teddy, to bring the girls down. Now that Mac (Seth Rogen) and Kelly Radner (Rose Byrne) have a second baby on the way, they are ready to make the final move into adulthood: the suburbs. But just as they thought they’d reclaimed the neighborhood and were safe to sell, they learn that the new occupants next door are a hard–partying, out-of-control sorority, led by Shelby (Chloe Grace Moretz). Mac and Kelly are forced to team up with their charismatic exneighbor and now secret weapon, Teddy (Zac Efron), since the ladies of Kappa Nu aren't going down without a fight.