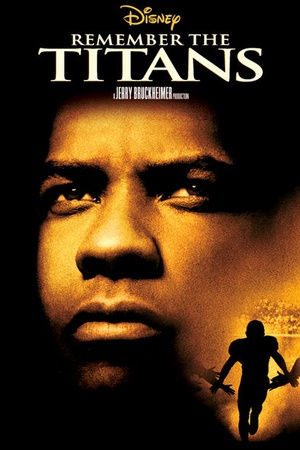 Is Remember the Titans on Netflix United States?

Sorry, Remember the Titans (2000) isn't available on Netflix United States, but is available in a different country.

The true story of a newly appointed African-American coach and his high school team on their first season as a racially integrated unit. Academy Award® winner* Denzel Washington (The Hurricane & The Bone Collector) gives a victorious performance in this stirring and uplifting film. Based on a real-life drama, REMEMBER THE TITANS is a rousing celebration of how a town torn apart by resentment, friction and mistrust comes together in triumphant harmony. After leading his team to fifteen winning seasons, football coach Bill Yoast (Will Patton) is demoted and replaced by Herman Boone (Washington), tough, opinionated and as different from the beloved Yoast as he could be. How these two men overcome their differences, and turn a group of hostile young men into champions, plays out in a remarkable and triumphant story full of soul and spirit. No matter what, you will never forget the Titans. Denzel Washington stars as an African American coach who heads a newly integrated football team -- despite the locals' objections -- in 1971 Virginia.

Check the Remember the Titans (2000) trailer!