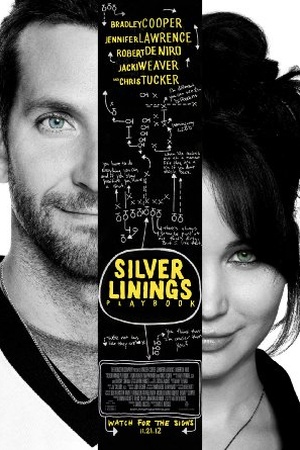 After a stint in a mental institution, former teacher Pat Solitano moves back in with his parents and tries to reconcile with his ex-wife. Things get more challenging when Pat meets Tiffany, a mysterious girl with problems of her own. Nominated for eight (8) Academy Awards, this acclaimed film broke stigmas for mood disorders in a raw, exuberant and ultimately triumphant story of misfit love, family and community. Set specifically in a Philadelphia neighborhood (based on Matthew Quick’s novel), Oscar-nominated Bradley Cooper surprised, moved, and captivated audiences in his portrayal of Pat Solatano, a man who returns from eight (8) months of enforced time in a mental hospital to put his life back together. Jennifer Lawrence dazzled — and won the 2012 Academy Award for Best Actress — as the tough and inspired neighborhood girl recovering from her own tragedies. She synchronized with gem performances by fellow Academy Award nominees Robert De Niro and Jacki Weaver who created an emotional household unlike any other in film built upon this father's superstitious bookmaking on Philadelphia Eagles games. With a stellar cast rounded out by Chris Tucker, John Ortiz, Anupam Kehr, Shea Whigham, and Julia Stiles, the film was singled out by US Senators in Washington seeking parity for mental health treatment and services. The film is a surprising story as heartfelt as it is comedic and enchanting. After a stint in a mental hospital, Pat moves in with his parents and tries to win back his wife, until he meets a woman who's as unstable as he is.