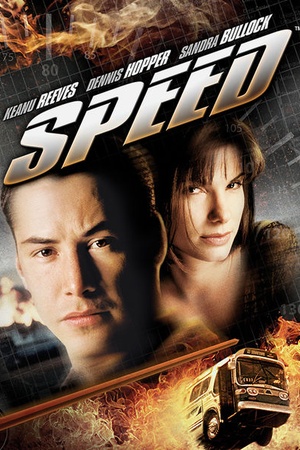 Is Speed on Netflix United States?

Sorry, Speed (1994) isn't available on Netflix United States, but is available in a different country.

A young police officer must prevent a bomb exploding aboard a city bus by keeping its speed above 50 mph. Jack Traven (Keanu Reeves), an LAPD cop on SWAT detail, has a fearless nature and a keen understanding of the criminal mind. That, and some luck have kept him alive. But Jack's luck is being put to the ultimate test. An elusive bomber-extortionist Howard Payne (Dennis Hopper) is seeking vengeance after his latest ransom scheme is thwarted. Payne gives a personal challenge to Jack: A bomb is rigged on a city bus, which will detonate if the speedometer drops below 50 MPH. Poor Annie (Sandra Bullock) gets shoved into the driver's seat, while Jack does his best to save the day. Tensions run high when a crazed bomber rigs a Los Angeles bus with a device that will kill everyone on board if the vehicle's speed dips below 50 mph.