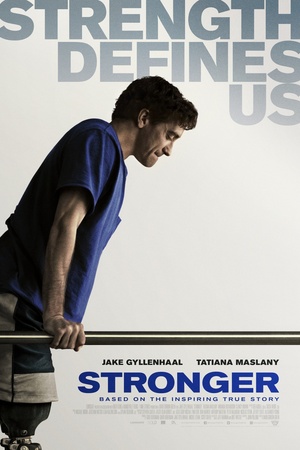 Is Stronger on Netflix United States?

Sorry, Stronger (2017) isn't available on Netflix United States, but is available in a different country. Still want to view it? click here.

Upon losing his legs in the 2013 Boston Marathon bombing, Jeff Bauman navigates the incident's overwhelming aftermath in this true story-based drama. Stronger is the inspiring real life story of Jeff Bauman, an ordinary man who captured the hearts of his city and the world to become a symbol of hope after surviving the 2013 Boston Marathon bombing. One man becomes a symbol of hope and determination for a wounded city in Stronger, a deeply personal account of the infamous 2013 Boston Marathon bombing and its aftermath. Based on Jeff Bauman’s New York Times bestselling memoir, the film celebrates his unrelenting courage against unimaginable odds. On April 15, 2013, Bauman (Academy Award nominee Jake Gyllenhaal) was at the finish line of the Boston Marathon to cheer on his ex-girlfriend Erin Hurley (Emmy Award winner Tatiana Maslany) in an effort to win her back. When a blast rips through the crowd, killing three people and injuring scores of others, Jeff goes from being an ordinary working-class 27-year-old to a double amputee fighting for his life. As Boston and the world reel in shock and anger, a photo of Jeff being carried from the blast site becomes an iconic image of the attack. Despite his injuries, the unassuming Costco worker becomes a national hero by helping law enforcement identify one of the bombers. In the months following the blast, Jeff tackles intensive physical and emotional rehabilitation with the unwavering support of Erin and his family. It is Jeff’s deeply personal account of the heroic journey that tests a family’s bond, defines a community’s pride and inspires his inner courage to overcome a devastating adversity.