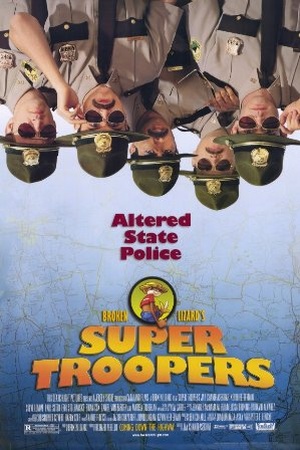 Sorry, Super Troopers is not yet available on Netflix.

Five Vermont state troopers, avid pranksters with a knack for screwing up, try to save their jobs and out-do the local police department by solving a crime. Committed to pranks and a love of syrup, the Super Troopers have turned arrest into an art form and become specialists at screwing with motorist's minds while screwing up on the job. For these highway patrolmen, the only thing better than a good prank is one-upping arch rivals - the Spurbury Local Police. But the town isn't big enough for both police forces. Budget cuts mean one force will have to go, and odds are that means the highway "super" troopers will be the first to go. Aware of the fact that their heads are on the chopping block, the super troopers try to play by the rules until a dead body, a stash of pot and an obscene little monkey enter the scene. They immediately spring into action, but, the local police are also quickly on the case. A race to catch the bad guys ensues as both forces hysterically try to become the local heroes.