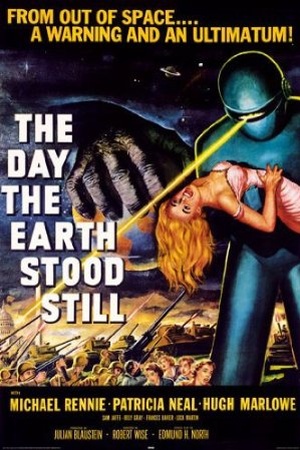 Is The Day the Earth Stood Still on Netflix United States?

Sorry, The Day the Earth Stood Still (1951) isn't available on Netflix United States, but is available in a different country.

An alien lands and tells the people of Earth that they must live peacefully or be destroyed as a danger to other planets. The Day The Earth Stood Still depicts the arrival of an alien dignitary, Klaatu (Michael Rennie), who has come to earth with his deadly robot, Gort (Lock Martin), to deliver the message that earthlings must stop warring among themselves--or else. After being shot at by military guards, Klaatu is brought to a Washington, D.C. hospital, where he begs a sympathetic but frank Major White (Robert Osterloh) to gather all the world's leaders so he can tell them more specifically what he has come to warn them about. Losing patience, Klaatu slips into the human world, adapting a false identity and living at a boarding house where he meets a smart woman with a conscience and her inquisitive son. Both mother and son soon find themselves embroiled in the complex mystery of Klaatu, his message and the government's witch hunt for the alien.  Seen by many as a political, religious and humanitarian effort, the film is based on Harry Bates’ story, "Farewell to the Master." An envoy from another world warns Earth's people to cease their violent behavior. But panic erupts when a nervous soldier shoots the messenger.

Check the The Day the Earth Stood Still (1951) trailer!