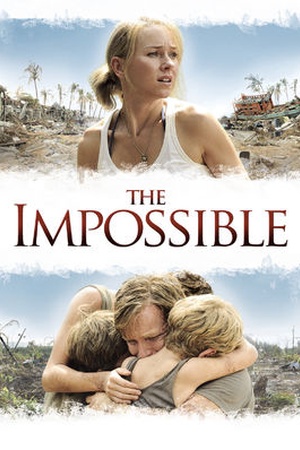 Is The Impossible on Netflix United States?

Sorry, The Impossible (2012) isn't available on Netflix United States, but is available in a different country. Still want to view it? click here.

The story of a tourist family in Thailand caught in the destruction and chaotic aftermath of the 2004 Indian Ocean tsunami. Nominated for an Oscar® (Best Actress, Naomi Watts), this powerful drama tells the incredible true story of one family's struggle to survive against impossible odds. During a trip to Thailand, Maria (Watts), Henry (Ewan McGregor), and their children must fight for their lives after a fierce tsunami begins wreaking havoc all around them. But even in the darkest hours, true-life terror is tempered by displays of courage and compassion in this epic journey to the very core of the human heart. Tracking one family's harrowing experiences, this gripping drama depicts the chaos generated by the massive 2004 tsunami in Southeast Asia.

Check the The Impossible (2012) trailer!