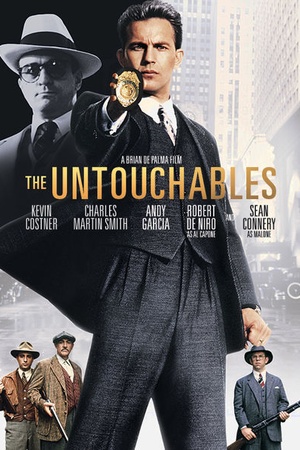 Is The Untouchables on Netflix United States?

Sorry, The Untouchables (1987) isn't available on Netflix United States, but is available in a different country. Still want to view it? click here.

During the era of Prohibition in the United States, Federal Agent Eliot Ness sets out to stop ruthless Chicago gangster Al Capone and, because of rampant corruption, assembles a small, hand-picked team to help him. In Brian De Palma's period crime drama, Eliot Ness will stop at nothing to take down legendary Al Capone -- even if it means bending some rules. The critics and public agree. Brian De Palma's The Untouchables is a must-see masterpiece - glorious, fierce, larger-than-life depiction of the mob warlord who ruled Prohibition-era Chicago... and the law enforcer who vowed to bring him down. This classic confrontation between good and evil and stars Kevin Costner as federal agent Eliot Ness, Robert De Niro as gangland kingpin Al Capone and Sean Connery as Malone, the cop who teaches Ness how to beat the mob: shoot fast and shoot first.

Check the The Untouchables (1987) trailer!