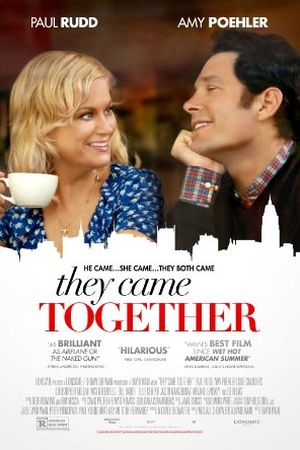 Is They Came Together on Netflix United States?

Sorry, They Came Together (2014) isn't available on Netflix United States, but is available in a different country.

Molly owns a quaint little sweet shop. Joel works for a gigantic candy company threatening to shut her down. How they meet, fall in love, break up and get back together is hilariously recounted in this rom-com spoof. In this semi-spoof of romantic comedies, candy company exec Joel falls for Molly, who owns a corner candy store he's tasked with closing. This hilarious sendup of everyone's favorite guilty pleasure - the romantic-comedy - stars Paul Rudd and Amy Poehler as the most unlikely couple you'll meet outside a Nora Ephron film. Joel (Rudd) is a big-time corporate suit vying to shut down Molly's (Poehler) quirky indie candy shop around the corner … and to steal her heart. They live happily ever after…until they don't. But maybe they do? (Hint: Joel bares his heart in a big speech at the end.) From the director of Wet Hot American Summer and Role Models comes this fresh, irreverent comedy with heart.

Check the They Came Together (2014) trailer!