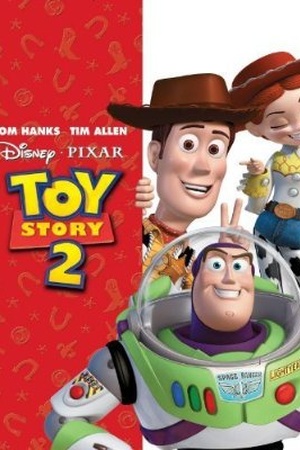 Sorry, Toy Story 2 (1999) isn't available on Netflix United States, but is available in a different country.

When Woody is stolen by a toy collector, Buzz and his friends set out on a rescue mission to save Woody before he becomes a museum toy property with his roundup gang Jessie, Prospector, and Bullseye. When Andy goes off to cowboy camp, an obsessive collector kidnaps Woody, and it's up to Buzz Lightyear and the gang to save their pal. The toys are back in town and ready to play once again on the big screen in Toy Story 2, the exciting sequel to the landmark 1995 animated blockbuster from Disney/Pixar. This comedy-adventure picks up as Andy heads off to Cowboy Camp leaving his toys to their own devices. Things shift into high gear when an obsessive toy collector named Al McWhiggin (Wayne Knight), owner of Al's Toy Barn, kidnaps Woody (Tom Hanks). At Al's apartment, Woody discovers that he is a highly valued collectible from a 1950s TV show called "Woody's Roundup," and he meets the other prized toys from that show - Jessie the cowgirl (Joan Cusack), Bullseye the horse and Stinky Pete the Prospector (Kelsey Grammer). Back at the scene of the crime, Buzz Lightyear (Tim Allen) and the gang from Andy's room -- Mr. Potato Head (Don Rickles), Slinky Dog (Jim Varney), Rex (Wallace Shawn) and Hamm (John Ratzenberger) -- spring into action to rescue their pal from winding up as a museum piece. The toys get into one predicament after another in their daring race to get Woody home before Andy returns.