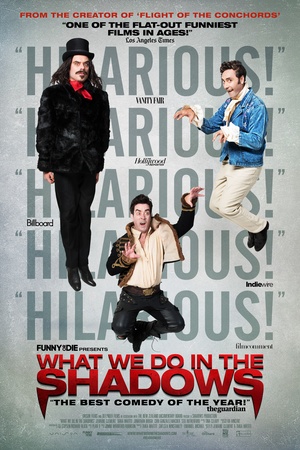 Is What We Do In the Shadows on Netflix United States?

Sorry, What We Do In the Shadows is not yet available on Netflix.

Viago, Deacon and Vladislav are vampires who are finding that modern life has them struggling with the mundane - like paying rent, keeping up with the chore wheel, trying to get into nightclubs and overcoming flatmate conflicts. Housemates Viago, Deacon, and Vladislav are three vampires who are trying to get by in modern society; from paying rent and doing housework to trying to get invited into nightclubs, they’re just like anyone else - except they’re immortal and must feast on human blood. When their 8000 year-old roommate Petyr, turns 20-something human hipster Nick, into a vampire, the guys must guide him through his newfound eternal life. In return, they are forced to learn a thing or two about modern society, fashion, technology, and the internet. But it’s the introduction of Nick’s human friend, Stu, that really changes the vampires’ lives and attitudes towards the world around them. When Stu’s life is threatened, the vampires discover that humans are worth fighting for, and that even though a heart may be cold and dead, it can still have feelings.