‘Amar, Akbar and Tony’ a British comedy to stream on Netflix 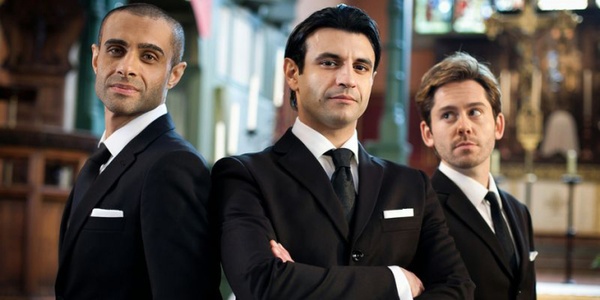 Variety noted recently that a British comedy film entitled “Amar, Akbar and Tony” has been picked up to air on Netflix. The movie follows three childhood friends, one Sikh, one Muslim, and the other Catholic, who grew up in Hounslow in the UK together and are now confronting the world as adults. It is described as a multicultural comedy that includes finding love, prison, an interracial marriage, and several tests of the long-term friendship of the three very different Britons living in a decidedly multiethnic society of modern Great Britain. The movie is based on a Bollywood film from the 1970s “Amar Akbar Anthony.”

A Screendaily review of the film that was written when it came out in Great Britain a couple of years ago noted that the film is good natured, sometimes poking fun at the eccentricities of the three friends’ various cultures, but never in a mean-spirited way. Amar is a newly-minted lawyer looking for his first job. Akbar is described as a “Muslim wide-boy” – a British term for a man who lives by his wits, and Tony is constantly falling for the wrong woman. They are now 26, and it is past time that they grew up. Other characters include a closeted gay Sikh uncle and a woman who has become the victim of a sex tape.  The movie, showing its Bollywood roots, ends in a myriad of weddings with lots of music and dancing. All in all, the film is a plea for tolerance, showing that despite cultural differences we all have a common humanity that should unite us.

For American audiences, “Amar, Akbar and Tony” will be a revelation. Most people who have not been across the pond have an image of Old England from Masterpiece Theater programs. To the extent that England ever existed, the country has undergone considerable changes thanks to immigration. Sometimes those changes have been none too pleasant, as anyone who has watched the news will understand. But the movie shows that there is another side to change in the ethnic mix of an ancient society.

“Amar, Akbar, and Tony” is due to premier on Netflix internationally on June 20 and will also be available on DVD in North America on the same day. The film was directed by Atul Malhotra and stars Rex Kempton as Amar, Sam Vicenti as Akbar, and Martin Delany as Tony.