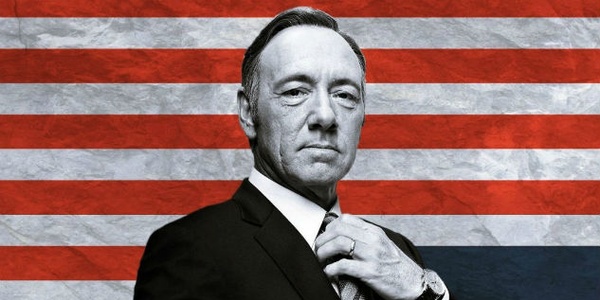 Season five of “House of Cards” has started to stream on Netflix, much to the delight of viewers who want reassurance that no matter how crazy politics can get in America in the real world, it can be worse. President of the United States Frank Underwood is facing his greatest crisis with the live execution of an American hostage and the United States going to total war against terrorists all around the world, regardless of the costs. Will Underwood be up to the task?

Underwood’s other problem, in an alternate 2016 election, consists of plunging poll numbers and the unexpected strength of his Republican opponent. Without revealing too much, one can say that Underwood handles the situation in his usual underhanded, ruthless manner. But things are about to go south for a president who would have people wondering if Americans got the better part of the deal after all with the choice between Donald Trump and Hillary Clinton.

“House of Cards” is based on a British limited series of the same name, but instead of a British parliamentarian, the American version features the House Democratic Whip, Frank Underwood, who explains the art of the political backstab in a silky, sweet southern accent when he breaches the fourth wall. He does not hesitate to have people killed, even a couple by his own hand, and to break the laws of the United States with an abandon that is unprecedented in the history of the American Republic.

Underwood is aided, at least at first, by his wife Claire, who proves to be just as ruthless and amoral as her husband. She is his one true love, as much as the president in “House of Cards” can love anyone or anything other than himself. Claire also proves to be Underwood’s deadliest enemy.

The inevitable comparisons can be made with “Game of Thrones,” though that series is set in a fantasy universe where people fight with swords and dragons. One would think that Frank Underwood would prosper in Westeros, though he would likely frighten even the worse of the Lannisters.

One question that comes to mind, how farther can “House of Cards” go? The one common things about larger than life villains like Frank Underwood is that they always fall. And when they do get what is coming to them, the event is as awesome as their rise to power. The next question is, who will come after? Who indeed?