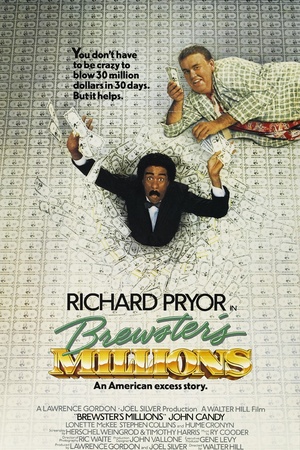 Sorry, Brewster's Millions (1985) isn't available on Netflix United States, but is available in a different country. Still want to view it? click here.

A minor league baseball player has to spend $30 million in thirty days, in order to inherit $300 million. However, he's not allowed to own any assets, destroy the money, gift it, give it to charity or tell anyone about the deal. A washed-up baseball player learns he's inherited a $300 million fortune from his dead uncle, but must spend $30 million within 30 days to get it. Richard Pryor is Montgomery Brewster, a minor league baseball pitcher who discovers he has to blow $30 million in 30 days as a condition to inherit a much greater fortune. Here's the catch: He will forfeit everything if he reveals to a soul the real reason he seems to be throwing away all that cash. With the help of his pal Spike (John Candy), they set off on a frantic spending spree the likes of which would bring any self-respecting accountant to his knees.