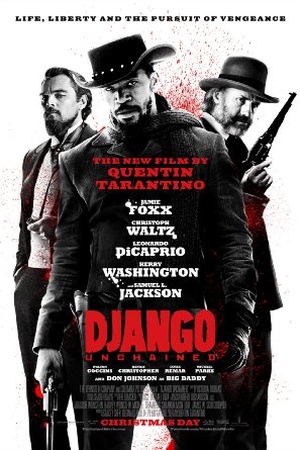 Sorry, Django Unchained (2012) isn't available on Netflix United States, but is available in a different country. Still want to view it? click here.

With the help of a German bounty-hunter, a freed slave sets out to rescue his wife from a brutal plantation-owner in Mississippi. Set in the South two years before the Civil War, DJANGO UNCHAINED stars Academy Award®-winner Jamie Foxx as Django, a slave whose brutal history with his former owners lands him face-to-face with German-born bounty hunter Dr. King Schultz (Academy Award®-winner Christoph Waltz). Schultz is on the trail of the murderous Brittle brothers, and only Django can lead him to his bounty. The unorthodox Schultz acquires Django promising to free him upon the capture of the Brittles - dead or alive. Also starring Leonardo Dicaprio, Kerry Washington, and Samuel L. Jackson. Accompanied by a German bounty hunter, a freed slave named Django travels across America to free his wife from a sadistic plantation owner.