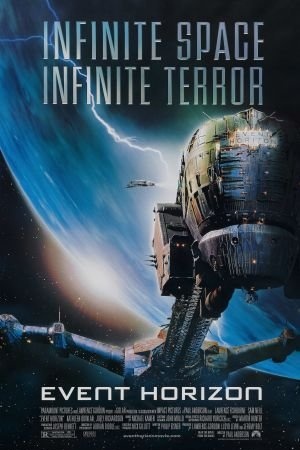 After a signal is received from a long-missing spaceship, a rescue ship investigates, but the crew soon realizes something unimaginable has happened. A rescue crew investigates a spaceship that disappeared into a black hole and has now returned...with someone or something new on-board. Its name: EVENT HORIZON. The high-tech, pioneering research spacecraft mysteriously vanished, without a trace, on its maiden voyage seven years earlier. But a weak, persistent signal form the long-missing craft prompts a rescue team, headed by the intrepid Captain Miller (Laurence Fishburne, THE MATRIX and MISSION: IMPOSSIBLE III), to wing its way through the galaxy on a bold rescue mission. Accompanying Miller is his elite crew and the lost ship’s designer (Sam Neill, JURASSIC PARK); their mission is to find and salvage the state-of-the-art interstellar horror. Kathleen Quinlan (APOLLO 13) and Joely Richardson (TV’s NIP/TUCK) also star in this gripping sci-fi thriller.