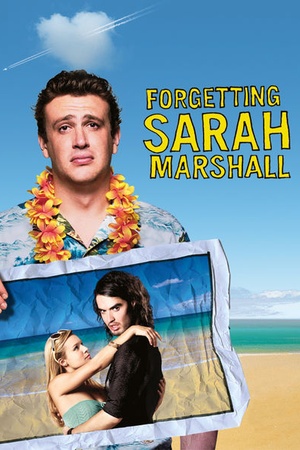 Devastated Peter takes a Hawaiian vacation in order to deal with the recent break-up with his TV star girlfriend, Sarah. Little does he know, Sarah's traveling to the same resort as her ex - and she's bringing along her new boyfriend. From the guys that brought you The 40-Year-Old Virgin and Knocked Up, comes “One of the funniest, damn movies I’ve ever seen!” (Richard Roeper, At the Movies with Ebert & Roeper). Peter (Jason Segel) is a struggling musician who finds his world turned upside down when his TV celebrity girlfriend, Sarah Marshall (Kristen Bell), dumps him for a tragically hip rock star. It's the hysterically funny look at how far one man will go to forget a girl – and all the fun he finds along the way! After his TV star girlfriend, Sarah, breaks his heart, Peter can't move on because she's vacationing at the same resort in Hawaii.