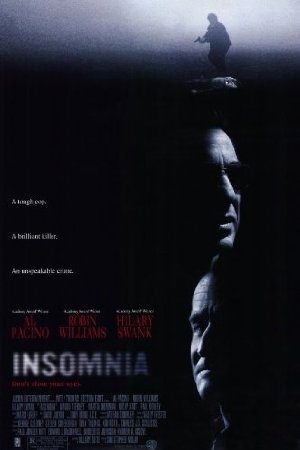 Is Insomnia on Netflix United States?

Sorry, Insomnia (2002) isn't available on Netflix United States, but is available in a different country.

Two Los Angeles homicide detectives are dispatched to a northern town where the sun doesn't set to investigate the methodical murder of a local teen. Academy Award winners Robin Williams, Al Pacino and Hilary Swank star in a thriller set in the land of the midnight sun, where a the mind of even a tough cop can be threatened by Insomnia. Under the glare of the permanent Alaska sun, two veteran Los Angeles police officers close in on their suspect in the murder of a teenage girl. But when officer Will Dormer (Pacino) accidentally shoots his partner, their murder suspect, reclusive novelist Walter Finch (Williams), witnesses the shooting--and blackmails Dormer. Now, as an idealistic local detective (Swank) investigates the case, and the stakes rise, Dormer's sanity begins to falter. Sent to investigate a teenage girl&#39;s murder in a small Alaska town, a detective accidentally shoots his partner while trying to apprehend a suspect.