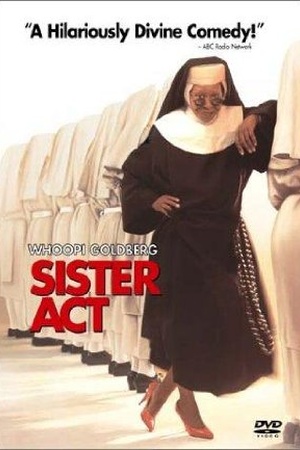 Sorry, Sister Act (1992) isn't available on Netflix United States, but is available in a different country.

When a nightclub singer is forced to take refuge from the mob in a convent, she ends up turning the convent choir into a soulful chorus complete with a Motown repertoire, until the sudden celebrity of the choir jeopardizes her identity. A singer witnesses a mob hit and hides out in a convent, where she introduces the sisters to doo-wop and turns the choir into fundraising stars. Relive all the fun, laughter and irresistible music of Sister Act – the inspired comedy hit that packed pews everywhere! Whoopi Goldberg stars as a sassy, low-rent lounge singer forced to hide out from the mob in the last place anyone would ever look for her – a convent. While she's there, her irreverent behavior attracts a flock of faithful followers and turns the nuns' tone-deaf choir into a soulful chorus of swingin' singin' sisters. But when the group earns rave reviews, her sudden celebrity jeopardizes her hidden identity. Harvey Keitel and Kathy Najimy join a heavenly cast in this habit-forming comedy bursting with 60's Motown hits.