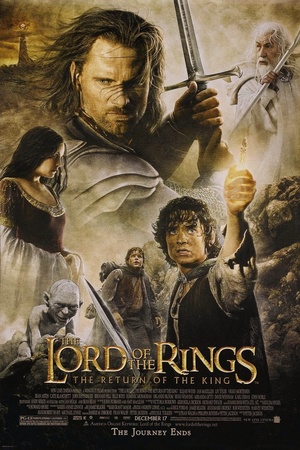 Is The Lord of the Rings: The Return of the King on Netflix United States?

Sorry, The Lord of the Rings: The Return of the King is not yet available on Netflix.

Gandalf and Aragorn lead the World of Men against Sauron's army to draw his gaze from Frodo and Sam as they approach Mount Doom with the One Ring. "One ring to rule them all. One ring to find them. One ring to bring them all and in the darkness bind them." -- J.R.R. Tolkien, The Lord of the Rings -- In the conclusion of J.R.R. Tolkien's epic masterpiece, The Lord of the Rings, as armies mass for a final battle that will decide the fate of the world -- and powerful, ancient forces of Light and Dark compete to determine the outcome -- one member of the Fellowship of the Ring is revealed as the noble heir to the throne of the Kings of Men. Yet, the sole hope for triumph over evil lies with a brave hobbit, Frodo Baggins (Elijah Wood - "Eternal Sunshine of the Spotless Mind," "Everything is Illuminated"), who, accompanied only by his loyal friend Sam and the hiddeous, wretched Gollum, ventures deep into the very dark heart of Mordor on his seemingly impossible quest to destroy the Ring of Power. Also starring Academy Award-nominee Viggo Mortensen ("A History of Violence," "Eastern Promises"), Academy Award-nominee and Golden Globe-winner Ian McKellan ("X-Men," TV's "Rasputin"), Orlando Bloom ("Troy," "The Pirates of the Caribbean” trilogy), Liv Tyler ("The Strangers" "The Incredible Hulk") and Academy Award and Golden Globe-winner Cate Blanchett ("Elizabeth," "The Aviator"). Winner of 11 Academy Awards including Best Picture and Best Director!

Check the The Lord of the Rings: The Return of the King (2003) trailer!