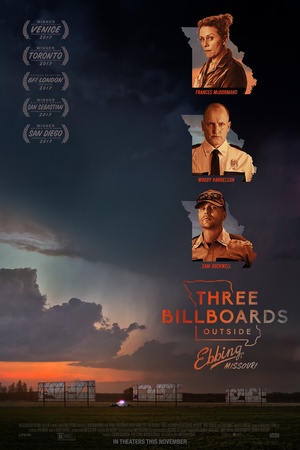 Is Three Billboards Outside Ebbing, Missouri on Netflix United States?

Sorry, Three Billboards Outside Ebbing, Missouri (2017) isn't available on Netflix United States, but is available in a different country. Still want to view it? click here.

A grieving mother, furious that the local police chief has not yet solved her daughter’s murder, puts up a series of billboards calling him out. A mother personally challenges the local authorities to solve her daughter's murder when they fail to catch the culprit. Award-winning actress Frances McDormand (Fargo) delivers a stunningly powerful performance in this darkly comic drama that has been hailed as one of the year’s best films. A murdered girl’s defiant mother (McDormand) boldly paints three local signs with a controversial message, igniting a furious battle with a volatile cop (Sam Rockwell) and the town’s revered chief of police (Woody Harrelson.)