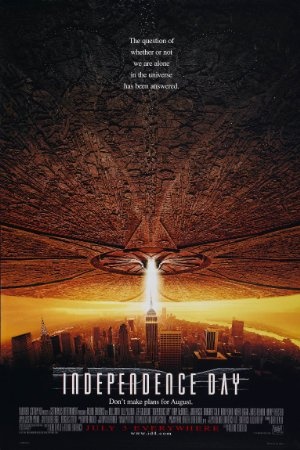 Sorry, Independence Day (1996) isn't available on Netflix United States, but is available in a different country.

The aliens are coming and their goal is to invade and destroy Earth. Fighting superior technology, mankind's best weapon is the will to survive. When aliens arrive in Earth's atmosphere and start blowing things up, a cocky pilot and a goofy scientist act to save humanity from destruction. On July 2nd, communications systems worldwide are sent into chaos by a strange atmospheric interference. First thought to be meteors, they are later revealed to be gigantic spacecraft, piloted by a mysterious alien species who have set out to launch an attack throughout the globe. On July 3rd, the aliens all but obliterate New York, Los Angeles, and Washington when a band of survivors devise a plan to fight back against the enslaving aliens. On July 4th, humanity fights for its freedom.